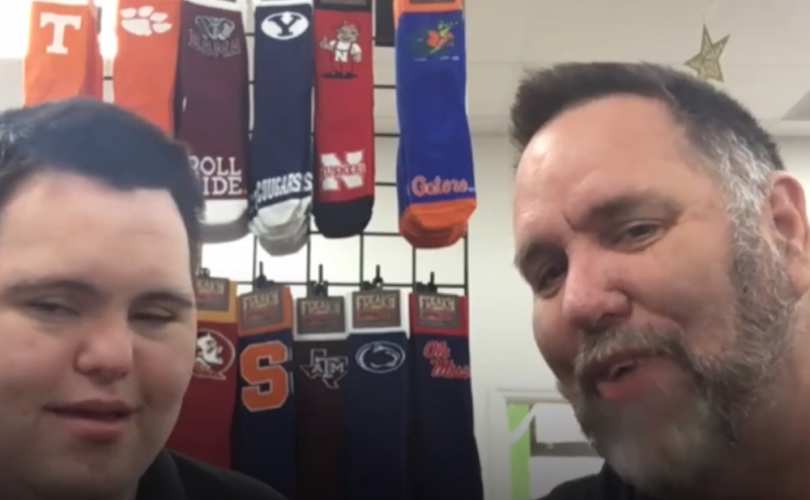 HUNTINGTON, New York, January 24, 2018 (LifeSiteNews) – A successful business co-founded by a young man with Down syndrome to make people happy is attracting more attention after a video was posted online recently that told its uplifting story.

The media had paid some attention to John’s Crazy Socks since its December 2016 founding, but a BBC News video on Facebook showcasing the company’s story has some 24 million views since it was posted January 15.

“Down syndrome never holds me back,” 21-year-old John Cronin says in the video. “We’re spreading happiness through socks.”

John’s Crazy Socks made $1.4 million in its first year of business. But the story behind the company – captured in the video – effectively illustrates how that even when there’s an extra chromosome human life is precious.

“We both are absolutely committed to the vision we have,” John’s dad, Mark Cronin, states in the video. “And we both know we need each other.”

“Right Dad,” his son chimes in.

John Cronin wanted to start a business with his dad after he finished high school. The primary idea was for it to be a fun store, John said.

The father and son had to figure out what that concept actually meant.

John then had the thought of opening a food truck.

“But we had a problem,” Mark Cronin says in the video, before turning to his son, “What was the problem?”

“Both of us can’t cook,” John Cronin replies.

Mark Cronin then asks his son to share his next idea.

“And I wanna sell socks because I wore crazy socks my entire life,” he says. “Because I do something, like, fun and (to) be creative.”

So it began with John Cronin’s love of colorful and fun socks, what he calls his “crazy socks.”

That led to John’s Crazy Socks.

Mark Cronin, who has experience in startups and currently leads an organization that develops online informational sites and niche online stores, handles the technical aspects of the business, including accounting, inventory management and staffing.

The company has a presence on several social media platforms, where John Cronin is spokesman.

John’s Crazy Socks offers roughly 1,200 different types of socks. Most have colorful or otherwise whimsical designs. There is also a Sock of the Month Club, the selection of which is made by John each month.

“We have all sorts of socks,” said Mark Cronin.

The company has four “Happiness Through Socks” principles: inspiration — showing what’s possible; giving back; socks you can love, and gratitude.

Customers get a thank-you note from John and some candy with each order. And for those living on Long Island, John delivers the sock order himself. The BBC video shows a customer hugging John as he makes a delivery to her.

John’s Crazy Socks employs a full-time staff of 12, eight of whom are disabled in some way. It also donates 5 percent of its profits to Special Olympics.

John Cronin designs specific socks to raise funds of charities. Some of those include Down syndrome and Autism awareness, Special Olympics and breast cancer research.

“It is never enough to simply conduct your business,” the company website information says. “It is incumbent on us to give back.”

The Long Island, New York-based online shop went from $14,700 in sales when it opened in December 2016 to $350,000 in March 2017, according to an April 2017 TIME report — without any marketing. The growth had already forced the Cronins to move the operation to a bigger building to meet the demand.

“Ours is a business built on love,” the company website states. “We’re on a mission to spread happiness through socks.”

“And we’re having fun,” Mark Cronin states in the BBC video. “We’re spreading happiness. What’s better than that?”